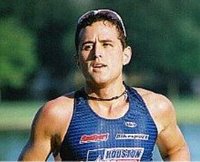 Race Summary:
This was one of the first races I did after moving to Houston from Austin. I had been training pretty hard all Summer which means not really all that much and it might have still been Spring. I do remember not placing in this race which wasn't much of a shocker due to the competitive field of racers.

Race Highlight: I got to wear my new Rudy Project team issue sunglasses that I bought off some guy on eBay. Those glasses were later stolen that following Memorial Day by a few guys who hotwired my Tahoe. I don't have that Tahoe anymore either.
at December 26, 2006