My long runs are not very long these days, but I am trying to ramp up the mileage to begin my marathon training next week! I am still having some pain in my left arch, but taking off 3 days before running on Saturday was a great idea. Since the pain goes away with rest I am hopeful it is not a bad as it could be. I was still able to put in a few good miles of hills at an EZ pace without any pain.

After finishing up the run I could tell the foot pain was going to set in again. I am thinking it might actually be the sandals I wear after running. I'm not even sure if that is a possibility but it seems like a good alternative to simply having pain from running. I am going to change up the post-run footwear to see if that will help. I am also heading to buy some new shoes to see if that will do the trick.

Treadmill... one more time. No matter what you do on a treadmill it never really seems to lose its ability to bore you to death. I suppose I am lucky to enjoy running so much otherwise it would be brutal.

So, as an update to my foot arch pain... it is still there. More treadmill is the prescription at this point. I am going to skip my Wed. and Thurs. runs to give my foot a chance to rest before putting in 9 miles on Saturday.

Off the path. On the Treadmill

Back on the treadmill today for a 45 minute EZ run. I am still feeling some lingering foot pain from my long run and I'm not too happy about it. My training has been heading in the right direction and last thing I need now is to be sidelined because of some random foot injury. I think it is more pain than injury but I am going to take action with RICE (rest, ice, elevation, compression) along with some ibuprofen.

I made it out for my 8 mile run today, not giving much thought to the previous issues I had with the pain in the arch of my foot. There was no pain for the past 48 hours so I figured I could get in a nice easy 8 without doing any damage.

The run felt good but I did not expect to see so many hills. There were many hills and they were steep and rolling. This might be one of the issues of my arches feeling pain. The incline of each hill has me running a little further up on the ball of my foot. I watch for this during my next long run.

Overall, I had a good run. I was able to get through the route without feeling any pain. I stopped for water at Publix. I will plan to bring fluids next time because that was a slight nightmare waiting in line, dripping with sweat, while other were waiting to buy eggs, paper towels, and bags of chips.

I have been using the treadmill more over the past few weeks because of our recent move to the Perimeter area of Atlanta. The increase in traffic and the late nature of my runs has me thinking more about safety then about finding new running routes. Because of this, I've put a few miles on the treadmills in our gym. Today was no different.

I'm also finding the treadmill to be a beneficial change from running the streets of Atlanta. The hills of the concrete jungle are beginning to take their toll on my joints and I think the arch of my left foot is getting the worst of it. I plan on using the treadmill throughout the week to supplement the long runs outdoors on the weekends.

Sometimes I run in traffic and Atlanta has some serious traffic. After moving from Alpharetta, GA to the Perimeter area just N. East of the King and Queen buildings I realized just how crazy the bumper to bumper action actually was.

Last night I got home from work about 7pm and went out for a 5 mile run. My pace was good and I negative split my out-and-back route, but the traffic added a new obstacle, literally, to my run.

I normally try to get out in the morning, but fatigue, soreness, and the need for sleep forced my run to the afternoon. Well, it was mid 80's so I decided to take it to the streets. This turned out to be a good and bad idea. Good because it was hilly, challenging and satisfying. Bad because I was constantly watching cars blow past me thinking I was going to get flattened. Flattened is not good.

I will be taking it to the streets again on Saturday but this time it will be at 6am. No traffic at 6am. 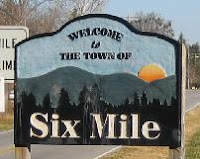 I woke up at 5am this morning for my run. It was another one of those mornings that I felt like staying put, but after about 5 minutes of sitting at the edge of the bed I forced myself up, laced up my shoes and hopped back on the treadmill.

Running six miles on the treadmill is becoming a habit. I came across the graphic at the top of this post and found it fitting. The run is always welcoming and I have enjoyed the mornings I get to make it happen.

This morning was no different. Alone in the gym with only the sound of the treadmill it is easy to let the mind drift off to something other than the monontony of the conveour belt beneath you. The six miles came and went quick. 5 miles tomorrow, but Thursday I will be making the journey back to the town of Six Mile.

Sunday Night Run with the Olympics

I skipped my run on Saturday due to time constraints and overall fatigue from the previous nights escapades. Guitar hero has been keeping us up WAY to late. So, after blowing off another Saturday run I figured I had to fit in my Sunday run no matter what.

I found myself on the treadmill at 10:15pm Sunday night fighting the urge to go to bed. The run was great. I got to watch a lot of the Olympics include Phelps and our other US swimmers. Running on a treadmill for 6 miles is boring, but the Olympic Games made for a nice distraction.

I have a rest day tomorrow and then my goal for the week will be to hammer through all my workouts... including Saturday.

It was a good run at around 7:45 per mile pace. I have off tomorrow
but will try to get in another workout before the Sat and Sun run.

--
Sent from Gmail for mobile | mobile.google.com