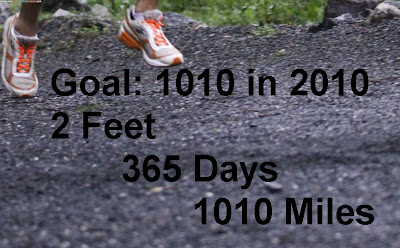 I've been mulling over this whole New Year Resolution thing and the goals keep revolving around running. One thing I know I've been lacking over the past few years is consistency in training. Some months I would take off weeks if not the entire month and then try to jump back into it.

So, I realized that my goal should include something that would force me to remain consistent through each week and each month so that I could set small goals to hit in order to reach the much larger goal by the end of the year.

This year I have decided to put together a total mileage goal to hit by the end of the year. I thought about doing 2010 miles since it would be pretty cool to hit the same number as the year, but I'm in no shape to start with they kind of mileage, so I opted for 1010 in 2010. It has a nice ring to it.