Training for a marathon by running the race route 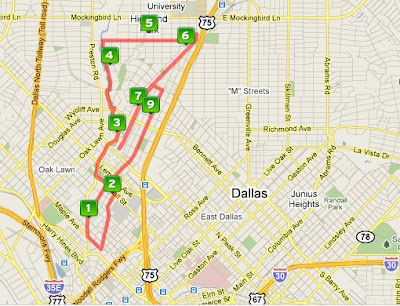 My training for the Dallas White Rock Marathon has not officially started yet but I am starting to focus on some good routes to run to help prepare me for race day. The marathon is a long race and the path it takes loops around the heart of Dallas. Road closures, police escorts, and water stations make it a great day. Running the entire route without those handy helpers who make sure you don't get run over by oncoming traffic makes training for the race by running the route a bit difficult.

So, to prepare for the Dallas White Rock Marathon I am taking the route on one week at a time. Today, I ran a portion of the route that went through Uptown and Highland Park Dallas. Taking the marathon on in bite size distances like this seems like a good idea. I am able to see the topography of the race and get a feel for where I might be able to gain some ground on the flat and down hill portions.

I'm going to try to run the entire route with multiple 5-15 miles per effort before the race. I might actually end up running the route more than 1 time with all the long runs I have planned. I'll be sure to mix in a few random routes as well to make things interesting.
at August 07, 2010

Travel Escorts India said...
This comment has been removed by a blog administrator.
August 18, 2010 at 3:49 AM

Love Reading your Blog
Thanks for shareing helpfull information