The 2014 Houston Marathon did not go as perfectly planned this year. For one, the training was great up until about 4 weeks out. I changed my training plan mid-way through the 16 weeks, which was not a big deal. I got started on the Hanson's Marathon Method, and thought it was going very well. In fact, I was able to pick up the mileage pretty easily and the speed / interval work was a good match to what I was already doing.

Then, Thanksgiving, work, and Christmas all converged in a line to disrupt what was a fine tuned training plan. I ended up taking time off, sometimes randomly, and at other times I planned the time off. I took a week off for travel up to Boston, but picked up where I left off in the training plan. That probably wasn't where the issue began. I think the real culprit was changing the time of day that I was running. Instead of waking up at the crack of dark dawn, I ended up running late after work. That is not that large of an issue, but the worst part was that it caused me to go to bed shortly after the run with tight legs waking up the next morning.

In the end, I thought it might be an IT band issue or maybe Runner's Knee. But what is runner's knee or what is IT Band syndrome? Both sound horrible, and after some research, both have different symptoms. I surmised that runners knee was my culprit, and after some mulling over the situation... decided to defer my Houston Marathon Lottery Slot. I figured a run or two on runners knee is probably a good thing, but 26.2 miles on the runners knee might be a bit much.

Now, I'm in rehab mode, and will likely put up a summary of how to rehab runner's knee in the near future. Until then, hopefully a few miles to ran on strong healthy legs.
at January 19, 2014 No comments: 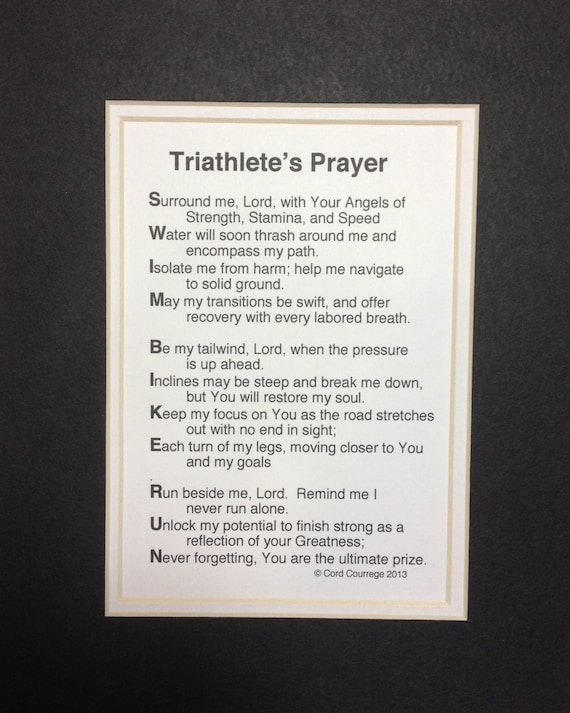 I have been doing some writing lately. Not just on this blog, but also on the side.  It has mostly been about running marathons, racing triathlon, and general sports related themes.

I took it to another level and had them printed out, matted in black, white, and sometimes pink mat-board, and then put out for purchase on Etsy.

Click here to see all my writings including the Marathoner's Prayer.

I'm glad I finally got them put together. It was a lot of fun and there were also some interesting things I learned from this little exercise that I will share in a future post. That was a cool process, and I plan on compiling these into a version of a Kindle Book in the future.